“It’s All About Me” Update 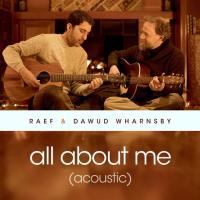 Response to “All About Me”, the song released last February by my friend Raef and I, has been fantastic!  Thanks to all of you who have taken the time to sing-along with the tune, share it with others, contact us with words of support and have been inspired by it’s message to reassess your daily amounts of “screen time”.  The song is now available for digital download here, should you want to add it to any of your playlists.  With views for “All About Me” on Youtube now well over 100,000, Raef has also uploaded a cute film of our shenanigans “behind the scenes” of the video shoot.   Lip-syncing at high-speed, gorging ourselves on snacks like divas between takes and rock-star pyromania on the set ~ they can all be seen here.

March came to a close with a treasured performance in my hometown at the Registry Theatre, opening for the incredible Mark Rust to a full house of sing-along lovers.  The evening was special on multiple levels:  1) The Registry Theatre was established years ago by JM Drama Alumni ~ teachers and classmates from my high school years, who still remain very dear to me.   2) The theatre is now managed by another old friend, Lawrence McNaught, who has supported my work directly and indirectly for over twenty years!   3) The evening concert was sponsored in conjunction with the Old Chestnuts Song-Circle: local musicians I love, who meet monthly to sing, strum and harmonize in a way that reflects the very essence of “Community Song”.  4) Among those who gathered for the evening were countless close friends, dear mentors and family members who don’t often get to see what it is I share when I am away from home singing with strangers in other parts of the world.

Of course, the most exciting part of the event was having the opportunity of opening for, and sharing songs with, Woodstock NY singer songwriter Mark Rust.  When I was initially asked to warm up the stage for Mr. Rust, my friend and event organizer Jack Cole told me, “You’re going to really connect with Mark.  You two see and understand music in similar ways.”   Jack was right.   Mark Rust represents the type of musician that I grew up wanting to be:  an individual who knows the power of song. . . and how to use that power for good!  As a strong link in the “old-time” musical tradition of using songs to tell stories and unite people, Mark has inherited the unique “Seeger-esque” skill of coaxing melody, harmony and feeling out of those who gather with him to sing.

A multi-instrumentalist, Mark has written hundreds of songs with lyrics that dig deeply into the human experience. His rich, warm and genuine voice resonates from a heart that seems to share similar qualities, tapping my tears at the sound check, even before the “official” concert began!  What a pleasure it was to also join Mark in a rendition of “Hobo’s Lullaby” toward the end of the evening.  Enjoy my favourite song of Mark’s entitled “Music Man” here, or check out his website here.

Last month I was back in studio briefly with my Abraham Jam brothers down in Asheville NC, putting a few finishing touches on our second album due out this summer.    Our first album, Abraham Jam Live, has been enjoying wonderful circulation since its release last October.   The next collection, fully recorded in studio, is shaping up to be quite a sensitive and eclectic mix of songs.  We’re having an incredible time capturing new material with our engineer/session player (an informal fourth member) Chris Rosser, and have been welcoming the artistic contributions of several guest artists to the project.  Listeners can expect to hear the evolving sound of our little trio as we continue bridging our musical, cultural and spiritual traditions in new ways.  We’ve also been working on a few cover tunes and mash-ups for the playlist which have been great fun to arrange and perform.  Friends in North Carolina can catch us at the LEAF Festival May 9 -12, 2019 alongside some incredible artists like India.Arie and Kobo Town.  More info and details here.

This site uses Akismet to reduce spam. Learn how your comment data is processed.